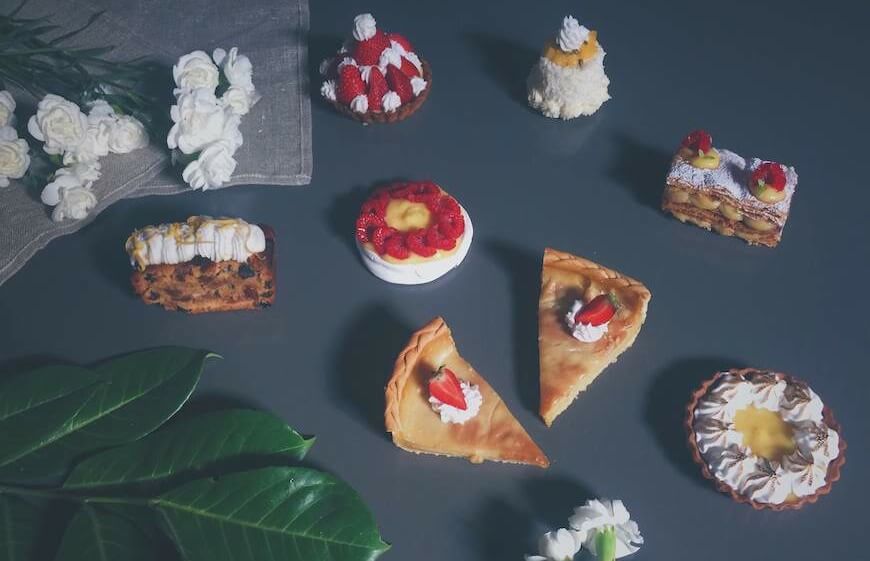 The Vegan Desserts You Need to Try in London

If you ever want to be inspired to try vegan dishes, London’s first ever vegan French patisserie might be the best place to start.

Cafe Forty One opened its doors this July and offers a unique and tasty dining experience to London’s fast growing vegan community.

This contemporary, light-filled dining venue might also appeal to those who just want to try something different, or who might simply be curious about following a vegan diet. 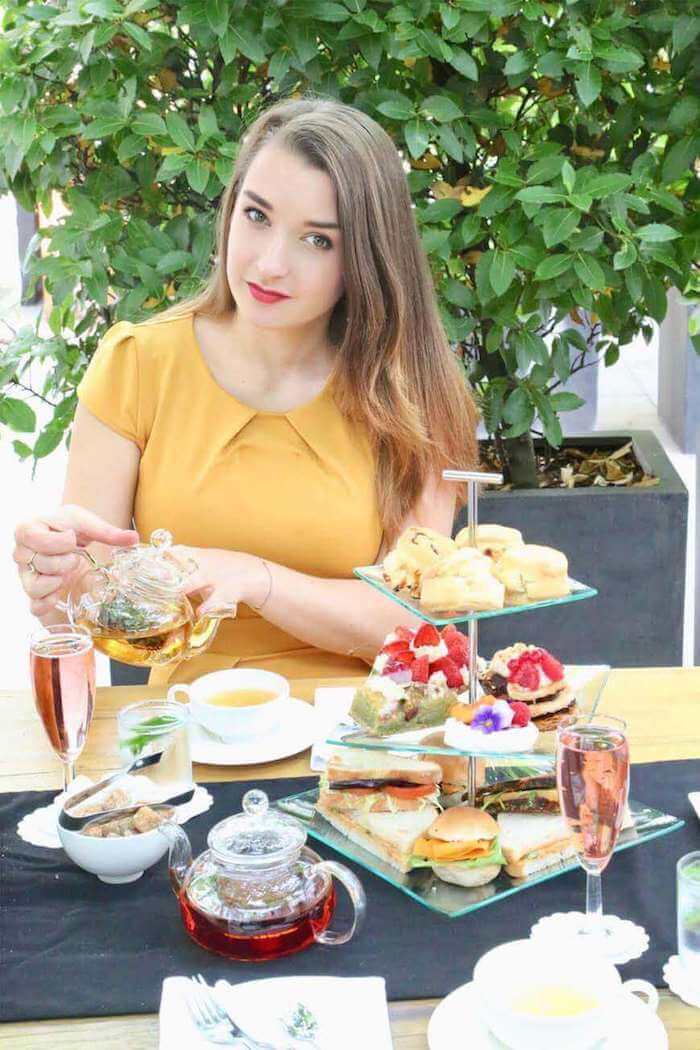 Eating a vegan diet – which is rich in fruits, vegetables and whole grains – pretty much guarantees you’re getting the necessary amount of vitamins each day.

And if you’re traveling on business and need a quick pick-me-up – or a treat that’s healthy – the vegan French patisserie at Cafe Forty one could be just the ticket.

Vegan food for the most part is also low in calories and high in fiber which means it’s filling and would offer convenient eating to time-strapped professionals who are on the go.

Overall, a vegan diet contains only plants and doesn’t include eggs and dairy products. In fact, around 3.5 million people are vegan in the UK, making up 7% of the population.

And whilst many people might worry about losing their source of iron if they decided to follow a vegan diet, leafy greens and beans are iron-rich.

Plant-based food rather than meat can also be integral to a meal, which is nonetheless refreshing. 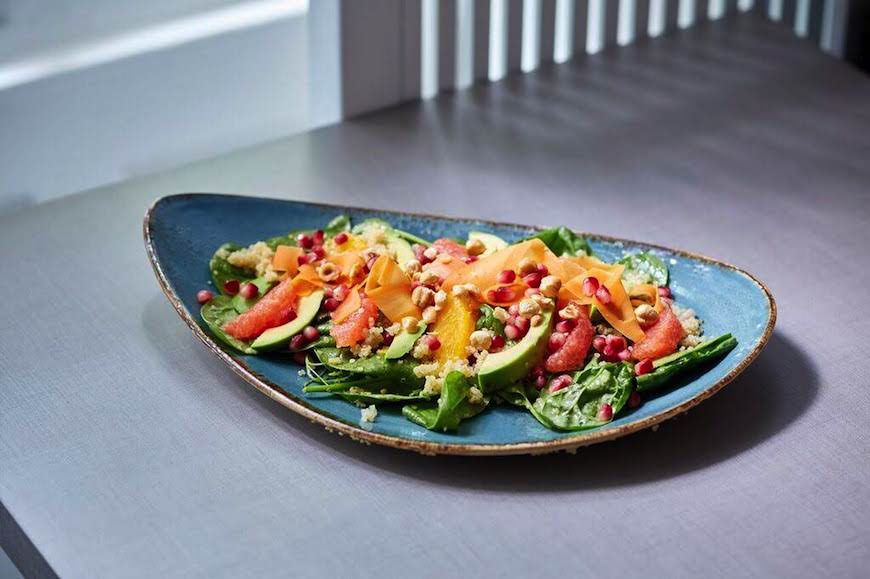 Citrus, smoked ‘salmon’ and pomegranate salad at Cafe Forty One

At Cafe Forty One the head chef Clarisse Flon is what’s known as a ‘speciality vegan chef’ and her clever dishes of plant-based foods are indeed special, delicate and tasty.

In fact, all her creations sit in-line with the ethos of La Suite West Hotel which has a focus on healthy and nutritious food and plans to become the first ‘vegan hotel’ in London.

Clarisse began her vegan journey and started a vegan diet after suffering a chronic digestive illness. This led her to investigate food preparation and its impact on health and the environment.

Following a stint working at a French patisserie, Clarisse also realized that vegan or gluten free alternatives were far better for her – and not so sugar heavy.

Today, Clarisse’s menus at Cafe Forty One can be enjoyed inside through the seasons and al fresco in the summer on La Suite West’s quiet, private terrace.

Her visually stimulating dishes are gluten free and can be tailored depending on a customer’s dietry request. 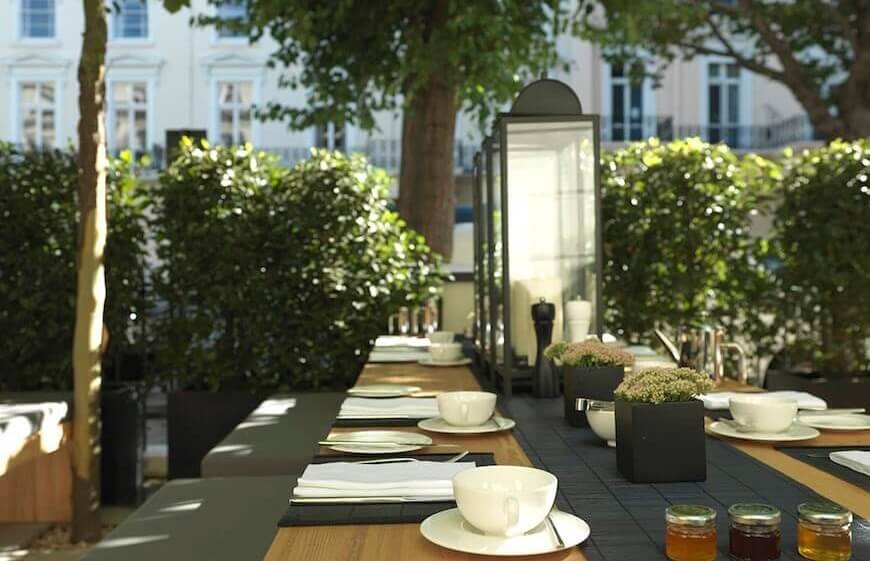 The terrace at La Suite West

There’s also avocado on sourdough toast and homemade brioche, as well as French toast with vegan yoghurt and roasted strawberries.

Afternoon tea is 35.00 GBP per person and includes sandwiches, patisseries of the week, non alcoholic fizz and coffee or tea.

Otherwise, Clarisses’ selection of vegan desserts changes every week and is available throughout the day. Her desserts are vegan interpretations of other delicacies using pure, vegan ingredients. 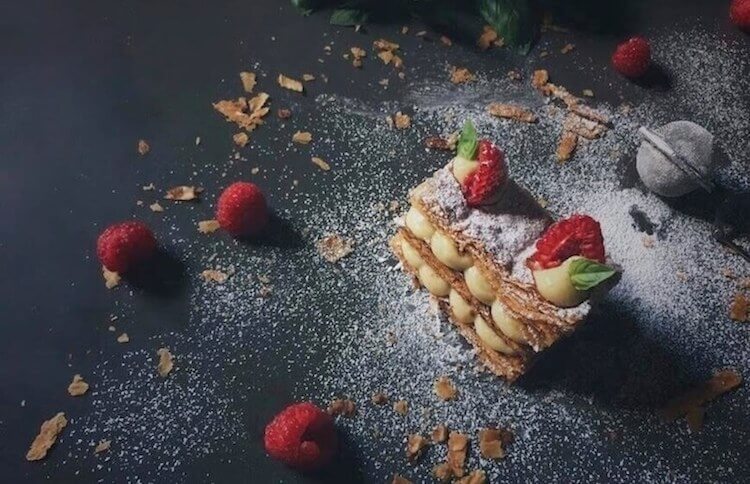 Chocolate and praline millefeuille at Cafe Forty One

‘I use different plant alternatives depending on desserts.’ Explains Clarisse.
‘For example we use almond, hazelnut or coconut milk depending on the dessert we make.
‘To substitute eggs it depends on each individual recipe, some recipes work without substitutes.
‘For example for our crème patissiere or crème brulee we use corn starch and for our meringue we use aquafaba (chickpea liquid).’

Also in the afternoon, for lunch there’s citrus smoked ‘salmon’ and pomegranate salad where the salmon is made from carrot.

Diners can also enjoy an Asian slaw salad with gluten-free breaded and buttery mushrooms, or they could try a red pepper, spinach and spring onion Frittata.